The Great Smoky Mountains National Park is made up of over 520,000 acres, many of which were once occupied by native Americans and settlers throughout time. As each acre was purchased and added to the protected land that would turn into America’s most loved national park, traces of the past began to slowly fade. The flora of the park slowly started to blanket the slivers of Smoky Mountain life even before the national park was formed and today, most of it is completely hidden. However, there are many gems of yesteryear that can still be found throughout the Smokies, some in plain sight but many can only be seen if you take time to look a little closer. Just outside of downtown Gatlinburg is the Greenbrier section of the Great Smoky Mountains National Park, an area that is filled with beauty and history. Once upon a time, the valley was a seasonal home to the Cherokee and later on a place that settlers and their descendants set up life in. They formed communities, farmed the land, built grist mills, gathered for church, and to shop in the general stores that were created over time.

Today, Greenbrier is a destination for hikers, families having picnics, anglers dreaming of rainbows in the river, and those searching for a connection to the past. Some that are seeking a connection because their family once called the area home, and others seek out glimpses of the past due to their love of the Smoky Mountains and its history.

Gems like the Whaley carving on a stone of the old mill that once stood next to the first picnic area are harder to find than others, but if you take the right path, slow down and look around, you’ll find them. There’s a trail along the creek that’s surrounded by rhododendrons that will lead you to at least 10 waterfalls. An old moonshine still sits back by a location that is often used by hikers to soak up the beauty of a night under the stars. 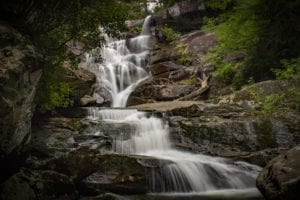 Remnants of one of the largest schoolhouses ever to exist in the Smokies lay hidden on the ground down near the fork in the road. Just up the hill from there you’ll find pieces of a place where many worshiped on Sundays. Along the trail to Ramsey Cascades, you’ll walk beneath old growth trees that were spared during the logging days, pass by an old manway and countless other peeks into the past.

Take a trip up Porters Creek to pay your respects at the cemetery, look for hidden gems around the old farmstead and the Smoky Mountain Hiking Club Cabin. The joy is in the journey and all of the treasures that you’ll find along the way. Be patient, pay attention, and in time, you’ll find the gems of Greenbrier.

2. Ghosts of the Past in Elkmont

It is often said that if you spend a quiet moment in Elkmont, you can hear the slamming of screen doors and the laughter of the children running off to the river or chasing the infamous Smoky Mountain fireflies. It’s not a claim of Elkmont being haunted but just a description of the beautiful energy and vibe that guests experience during their time in one of the most historical areas of the park.

The Ownbys and Trenthams were two of the first families to settle along Jakes Creek in Elkmont. They worked to farm the land in the 19th century and then by the early 20th century logging companies had discovered the natural resources of the Smokies and Elkmont. Little River Railroad Company President Col. W.B. Townsend decided to move on to the benefits of tourism in the area as the resources for logging began to dwindle. In the summer of 1912 the Wonderland Hotel opened its doors for guests and the flow of city slickers from Knoxville escaping to the Smokies began. Folks would ride in on the train and spend their days cooling off and relaxing in Little River. They formed the Appalachian Club and over time built a clubhouse, cabins, and more. Today you can explore the old site of the Wonderland Hotel, many of the vacation homes or even get married in the Appalachian Clubhouse. Take time to explore and you’ll find gems of the past that include an old car up Little River Trail, the Troll Bridge tucked away in the former home sites, an old apple cellar, chimneys, random pieces of the past that have been long forgotten, and many other connections to the past generations that have roamed Elkmont.

3. The Secrets of Junglebrook and Roaring Fork

The Roaring Fork area of the Great Smoky Mountains National Park is located just minutes away from the hustle and bustle of downtown Gatlinburg and is thriving with lush beauty, history and secrets.

Before you reach the first cabin pull off, you’ll drive by the property that once belonged to Louis E. Voorheis. The area was his mountain retreat and his place for escaping the hectic life of being a businessman and philanthropist. Voorheis designed his estate in a way that flowed beautifully with the mountains and the creeks that run to the east and west of the property. He created stone gardens and fountains, rustic but well designed buildings, a stunning spring house known as The House of the Fairies, gardens, and more. Today many pieces of the historic landscape still stand and are often explored by those seeking to witness the beauty that Voorheis created during his time in the Smokies. Just up the road from the estate is the Noah “Bud” Ogle farmstead that was later referred to as Junglebrook by an owner that followed Ogle in tending to the farm and land. Stop and take some time to explore the nature trail to find some great gems that are gently tucked away. If you’re traveling with children, see if they can spot the small door of the cabin that once allowed chickens to escape hungry coyotes at night.

After you leave the Ogle homeplace, you’ll have the option to take in the Roaring Fork Motor Trail. Along the way are countless stops, trails, cascades, paths to hidden places, homeplaces of former residents, a mill, and more. Take your time and explore because you never know what you might find if you look a little closer during your trip to Gatlinburg and the Smokies!

You’ll love exploring in the national park and seeing these unique places. Are you ready to start seeking out the hidden gems of the Great Smoky Mountains National Park? Look through our Gatlinburg hotel rooms, and book your next trip today!